The tholos of Athena Pronaia 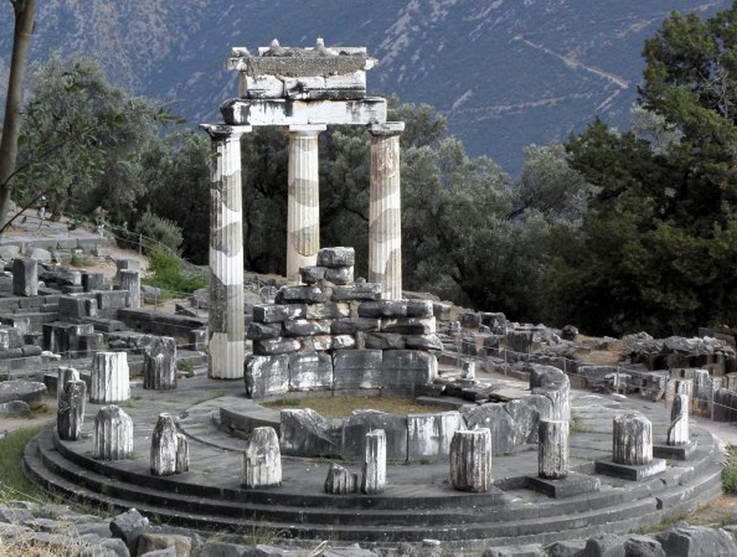 The tholos of the sanctuary of Athena Pronaia, clearly visible from above, is perhaps the most characteristic monument at Delphi and the most important building of this small sanctuary. Located between the later temple of Athena and the Treasury of Massalia, this circular building of unknown purpose is a masterpiece of Classical architecture. It is thought to have been connected with chthonic cults, although Pausanians, who saw its ruins in the second century AD, does not refer to it as a temple.


According to Vitruvius, this impressive building was raised in 380 BC on plans by the architect Theodoros of Phocea or Phocis, who even wrote a book about the way it was built. The tholos is a synthesis of most styles of Classical architecture. It rests on a three-stepped podium and the twenty Doric columns of the outer peristyle supported a Doric frieze of triglyphs and metopes with relief decoration. Inside the cella were ten engaged Corinthian columns. A variety of materials were used in order to achieve a multi-coloured effect: Parian and Pentelic marble, and blue Eleusinian limestone for the structural details, the base of the cella wall, and the floor. The marble ceiling comprised lozenge-shaped coffers, of which several are preserved. The probable conical roof was decorated with acroteria in the shape of women, in a dance-like pose; its reconstruction remains problematic, particularly after the recent discovery of two rows of water-spouts. The building's relief decoration was disfigured by Christians in later years.


The tholos was partially restored in 1938. Several architectural members and the surviving sculptures were restored and are now on display in the Delphi Archaeological Museum.

Booking.com
More hotels near The tholos of Athena Pronaia