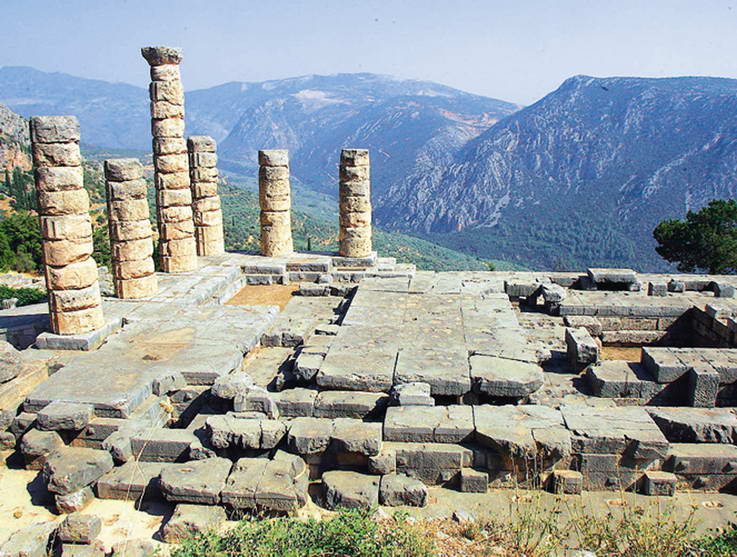 The temple of Apollo, the most important building in the sanctuary of Apollo at Delphi, dominates the temenos from its central position. This is where the statues and other offerings to the god were kept, and where the cult rituals, including that of divination, took place. Also, here was the chresmographeion, or archive, destroyed in 373 BC, which contained the lists of victors of the Pythian games.


According to the legend, the first temple of Apollo at Delphi was made of laurel branches, the second of beeswax and feathers, and the third of bronze, while the fourth was built by the legendary architects Trofonios and Agamedes aided by Apollo himself. This was probably the stone temple destroyed by fire in 548 BC. Its replacement, built with contributions by both Greeks and non-Greeks, was completed around 510 BC by the Alkmaeonid family of Athens. This was a Doric peristyle temple, with six columns at the end and fifteen at the sides. Stone-built and marble-clad, it was sumptuously decorated with sculptures by the famous artist Antenor. The east pediment depicted Apollo's epiphany when he arrived at Delphi with his sister Artemis and his mother Leto; the chariot of the gods occupied the centre of the scene and was framed by male and female figures. Of the west pediment, which depicted the Gigantomachy, only the figures of Athena, a fallen giant, a male figure and two horses have survived.


This temple was destroyed by earthquake in 373 BC. The existing temple, also built with Greek contributions, was not completed until after the Third Sacred War, in 330 BC. This imposing Doric temple was raised by the architects Spintharos from Corinth, Xenodoros and Agathon. It has the same plan and roughly the same dimensions as its predecessor, with six columns at the end and fifteen at the sides, and both prodomos and opisthodomos in antis. The cella was divided into three naves by two colonnades of eight Ionic columns each. The divination ceremony took place in the adyton, or inner shrine, an underground chamber where only the priests interpreting Pythia's words had access. The pedimental sculptures of Parian marble are the work of the Athenian sculptors Praxias and Androsthenes. The east pediment depicted Apollo and the Muses, and the west Dionysus and the Maenads. Little is known of the arrangement of the temple's interior; ancient writers mention that the walls of the pronaos were inscribed with aphorisms of the seven sages, such as 'know thyself', 'everything in moderation' and the letter E. There was a bronze effigy of Homer and an altar of Poseidon, and, in the adyton, a statue of Apollo and the omphalos.


The temple has been partially restored. Fragments of the pedimental sculptures of both the Archaic and the Classical/Hellenistic temple are displayed in the Delphi Archaeological Museum.

Booking.com
More hotels near Temple of Apollo at Delphi