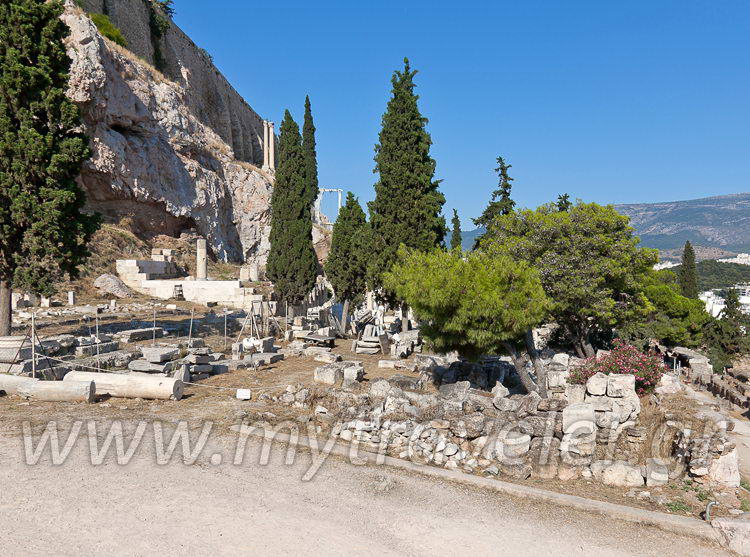 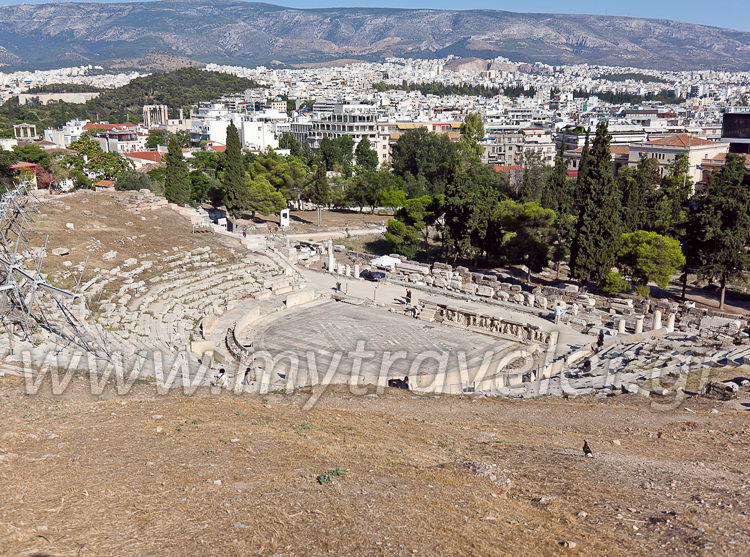 The south slope of the Acropolis played a significant role in the artistic, spiritual and religious activity of ancient Athens. Important public buildings were erected in the area: the Odeion of Perikles, the sanctuary and theatre of Dionysos, the choregic monuments, the Asklepieion, the stoa of Eumenes and the Odeion of Herodes Atticus.

The famous Herod Atticus Odeon dominates the western end on the south slope of the Acropolis. It was the third Odeon constructed in ancient Athens after the Pericles Odeon on the south slope (fifth century) and the Agrippa's Odeon in the ancient Agora (15 BC). The construction of the monument during the second century AD was sponsored by Tiberius Claudius Herod Atticus, renowned offspring of an important Athenian family and a benefactor; he thus acted in remembrance of his wife Regilla, who died in 160 AD. The exact date of construction is unknown, but it was certainly built sometime after Regilla's death and 174 AD, when the traveller and geographer Pausanias visited Athens and referred to the monument in great admiration.


The roofed Odeon served mainly musical festivals, and could host up to 5,000 spectators. It was a solid construction, but the masonry was not massive. Both wall surfaces were covered by poros stone blocks, while the interior was filled with quarry faced stones. The semicircular cavea (in Greek koilo, auditorium), 76m in diameter, was hewn out of the rock. It was divided into two sections (diazomata, landings) by a 1.20m wide corridor; each diazoma numbered 32 rows of seats made of white marble. The upper corridor of the cavea was probably bordered by a gallery. Also semicircular, the orchestra, 19m in diameter, was paved with white marble. The scene was raised and the scenic wall, preserved up to 28m, extended over three levels. Arched openings decorated the wall's upper part, while the lower part contained several tristyle prostasis (three-columned projecting porticos) and niches for the placement of statues, a traditional feature in Roman theatres. The scene was flanked by staircases leading to the upper diazoma. A gallery called metaskenio lined the front of the outer scenic wall. Mosaic floors with geometrical and linear patterns covered the entrances to the staircases and to the metaskenio. The monument was an extremely expensive construction, which is also confirmed by ancient testimonies referring mostly to the cedar wood used for the roof. It seems that the roof of the cavea, with a 38m radius, had no internal fixings, since there are no traces of such fixings, which constitutes a unique construction achievement even in our days. To the east, the Odeon was connected to the gallery of Eumenes, a roofed edifice built about three centuries previously (197-159 BC), by Eumenes, king of Pergamos (also known as Pergamon or Pergamum).


The Odeon was destroyed in 267 BC at the incursion of the Heruli (or Erils), who burnt and flattened many buildings in ancient Athens; it was never reconstructed contrary to other edifices that suffered damages. In later years, the Odeon was incorporated within the fortifications of the city of Athens. Its south wall made part of the Post-Roman wall erected in the third century AD, whereas in the thirteenth century the high scenic wall was included in the wall surrounding the Rizokastro, i.e. the base of the Acropolis hill. In the fourteenth century, the embankments covering the lower part of the monument's south wall were so thick, that the entrances were not visible anymore, and the Italian traveller Niccolo da Martini qualified it as a bridge. It was from the Odeon that the French Philhellene General K. Favieros and his soldiers entered Acropolis in 1826 during the siege of Acropolis by the Turks, supplying the beleaguered Greeks with provisions and gunpowder. The excavations at the monument started in the mid-nineteenth century by the Archaeological Society and the archaeologist K. Pittakis, removing tones of earth. The monument was restored during 1952-1953 using marble from the Dionysus area; since 1957 it stages art festivals (concerts, ancient drama performances, etc.) mostly in the framework of the Athens Festival.