Sanctuary of Asklepios at Ancient Epidaurus 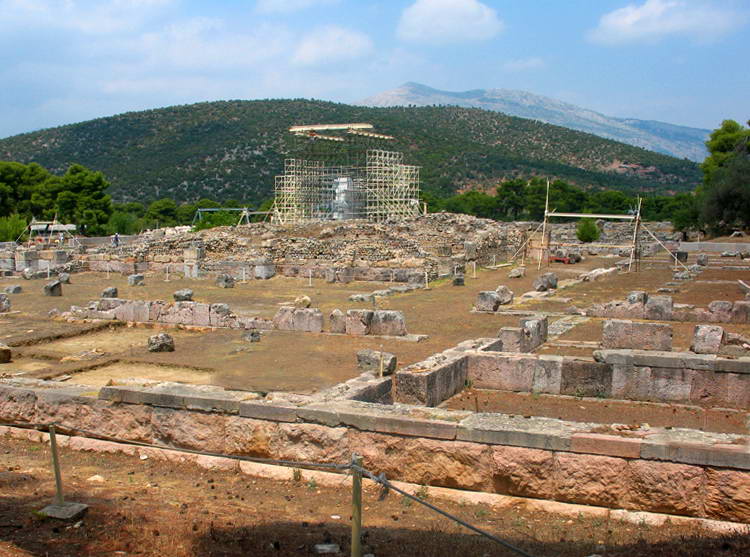 In the peaceful hinterland of Epidaurus, with its mild climate and abundant mineral springs, is the sanctuary of the god-physician Asklepios, the most famous healing centre of the Greek and Roman world. The sanctuary belonged to the small coastal town of Epidaurus, but its fame and recognition quickly spread beyond the limits of the Argolid. It is considered the birthplace of medicine and is thought to have had more than two hundred dependent spas in the eastern Mediterranean. Its monuments, true masterpieces of ancient Greek art, are a precious testimony to the practice of medicine in antiquity. Indeed they illustrate the development of medicine from the time when healing depended solely on the god until systematic description of cases and the gradual accumulation of knowledge and experience turned it into a science.


The Asklepieion at Epidaurus comprises two sanctuaries dedicated to two healing gods: the earlier sanctuary of Apollo Maleatas on Mt. Kynortion and the later sanctuary of Asklepios in the plain, where the famous healing rituals took place.

The sanctuary in the plain is the largest and better known of the two. The entrance to the modern archaeological site is located on its southwest side, but the sanctuary was originally accessed from the north through the Propylaia, a monumental Doric gate of the third century BC. A sacred road beginning in the coastal town of Epidaurus passed through this gate and led to the Doric temple of Asklepios, of which only the foundations are now visible at the centre of the sanctuary. Several buildings related to the cult of Asklepios and the healing rituals surrounded the temple: the Abaton, where the patients' enkoimisis, or hypnosis, took place, the Tholos or Thymeli, a circular peristyle building, which housed the mystical chtonic cult of Asklepios, and the Banqueting Hall where the patients dined. Buildings for the needs of the patients and worshippers, and others used during the Asklepian Games, which were established in the fourth century BC, surrounded the sanctuary. These included a large hostel of 160 rooms for the patients and their aids, baths, a palaestra, a gymnasium, an odeon, a stadium and the most perfect example of Greek theatre, remarkably adapted to the landscape, beautifully proportioned and with perfect acoustics. The remains of several small temples dedicated to Apollo, Artemis, Aphrodite and to other deities related to the cult of Asklepios, such as Hygeia, Machaon, Telesphoros, Hypnos and Epione, are also preserved. A complicated hydraulics system consisting of channels and settling basins, of which parts are still visible today, brought water from the mineral springs of Kynortion to two distribution points in the northeast part of the sanctuary, the Doric Spring and the Sacred Spring.


In the northeast part of the sanctuary one can see mostly remains of the second century occupation phase, which include the library, baths, small temples and the so-called Stoa of Kotyos, recently identified with the Sanctuary of the Egyptians, dedicated to Asklepios, Apollo and Hygeia (as Osiris, Horus and Isis respectively). Also visible are the remains of the fourth century AD portico, which incorporated parts of earlier buildings, mainly the Katagogion.


The smaller mountainous sanctuary of Apollo Maleatas was continuously occupied from the Early Helladic period (apsidal building) to Roman times. The three terraces of the Mycenaean temenos with its open-air ash altar and area for ritual feasting are still visible. Parts of the tufa foundations of the temple of Apollo erected in 380 BC over the ninth century BC ash altar and of the small Archaic temple of the seventh century BC are preserved on the lower terrace. A monumental tetrastyle altar was built in the Classical period east of the temenos. In the fourth to third centuries BC, during the sanctuary's most important construction period, a terrace wall was raised along the sanctuary's northern limits. This wall was lined by a portico facing south. An extremely rare small open-air sanctuary of the Muses dates to this period. The remaining visible monuments - that is, the propylon, or entrance gate, the Skana, or restored Hellenistic house of the priests, the basin of Antonine, of which a large part of the roof is preserved, and a fountain - all date to the second century AD.

Booking.com
More hotels near Sanctuary of Asklepios at Ancient Epidaurus