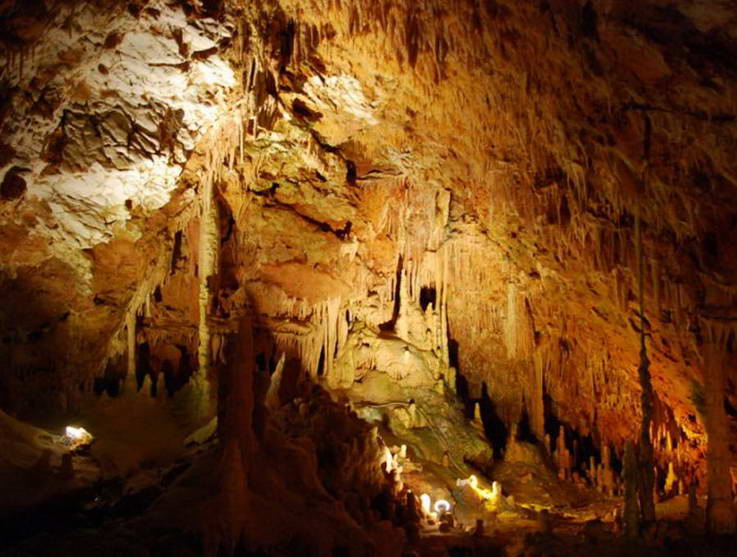 One of the most enchanting caves in the world lies on the western coast of the Laconian peninsula, in the Bay of Diros. With the utmost patience and artistry, nature has fashioned a wonder beyond imagination beneath the austere landscape of Mani. Brilliant white stalactites and stalagmites and impressive glittering crystal drapes decorate every corner, creating a breathtaking spectacle!


The cave began to be formed hundreds of thousands of years ago. The stalactites and stalagmites that are now beneath the water were formed when the sea level was much lower than it is today. Stalactites have been found at a depth of 71 meters. The water that seeps into cracks in the limestone bedrock dissolves it. Drop by drop the deposits of dissolved carbonated limestone gradually form stalactites and stalagmites to create the wonderful spectacle we see today. The water in the cave is brackish and very hard. Its temperature is about 14 degrees centigrade, while the temperature of the air in the cave ranges from 16-19 degrees centigrade.


The natural entrance to the cave has a diameter of barely half a meter and is very close to sea level. In older times the cave had other entrances that gradually closed.

Inside the cave have been found fossilized bones of panthers, hyenas, lions, deer, ferrets and the largest collection of hippopotamus bones in Europe. Pottery has also been found near the natural entrance to the cave, indicating the presence of man.