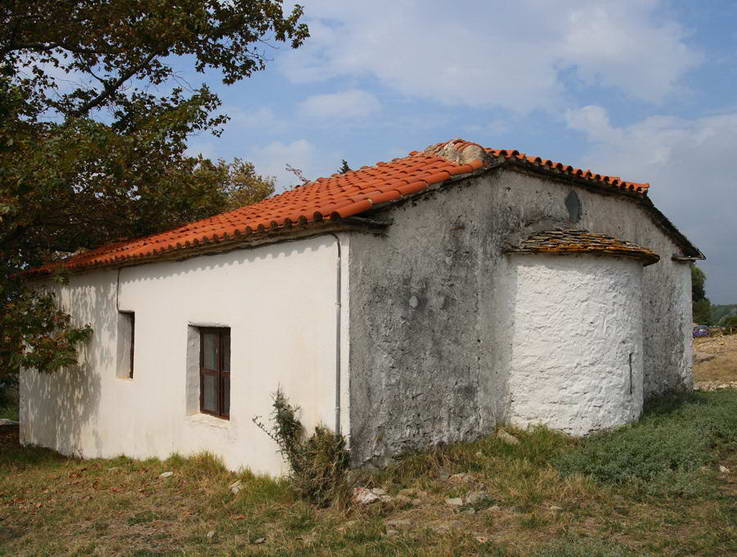 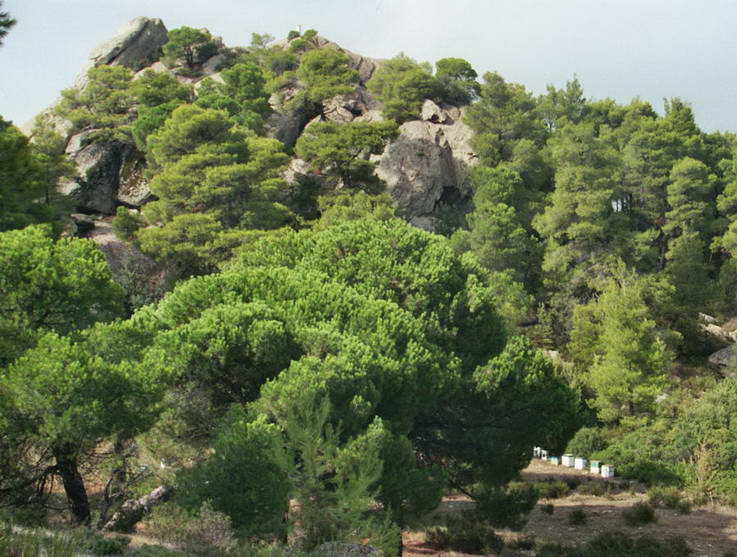 This high level easy route starts at the roadside just opposite the back entrance to the Athena Pallas Hotel at Elea Beach. It is an easy woodland walk along forest roads and narrow tracks, which give fine views of the coastline and beyond.

The walk visits the church to Paul the Apostle on the hill above Elea Beach and also Petros, the very large rock, with a trig point on its summit, which pokes up through the trees. This is the highest point on the ridge and those with a good head for heights can ascend the rock to enjoy the excellent views over the peninsula.

Ag. Pavlos (The church of St Paul the Apostle) is built near an ancient spring with very pure water. You will probably observe local people here filling plastic bottles and loading them into their cars, particularly on a Sunday. The legend goes that St. Paul passed through here on his way to Rome and at this spot he was thirsty. He prayed for water and struck the ground with his staff. The spring immediately gushed forth and it has been flowing ever since.

The path Starts at the track, which leads into an olive grove almost directly opposite to the rear entrance of the Athena Pallas Hotel. The track runs in a south-easterly direction along the edge of the olive grove for about 300m when a track junction is reached. Take the lower track, which passes an electrical sub Station as it meanders along, but still continues in the same general direction. In 400m or so a shallow valley to the right gradually gets deeper and the route begins to climb more steeply through the trees in a series of short zigzags. As the broad summit of the ridge is reached, the path turns more to the north and the woodland thins, thus providing fine views over the coast. Four hundred metres of gentle ascent along this broad ridge bring the walker to Ag. Pavlos, with its holy well.

The land on this plateau is like a giant rock garden as massive rocks are interspersed with pine trees, flowering shrubs, heathers, and other plants. It is beautiful at any time of the year, but even more so in the spring. Like many other walks in the area, many of the forest tracks are lined with beehives and there is often the sweet smell of honey in the air.

To continue on to visit Petros, take the sandy track that leads almost due east from the church (Look for the way-markers). Four hundred metres along this track look out for a Poseidon way marker on a tree to the right of the track. This marks the Start of a narrow woodland path that will take us directly to Petros. The route winds through the trees and there are many tracks, due to the herds of goats that graze in these woods. To avoid getting lost, look for the Poseidon way markers on the trees. The track meanders on in a south-easterly direction for a distance of 300m to arrive at an open, grassy Clearing in the woods surrounded by large rocks.

This is a good place to take a coffee break. The rocks in this area and the sand in the road sparkle a lot when seen in the sunshine. This is due to the presence of the mineral mica in the rocks, which is used in industry as an electrical insulator. The path now continues, through mainly open woodland, to the southeast. In 400m we emerge onto a track immediately to the north of Petros, although the rock itself is hidden amongst the trees. Follow the grassy track to the south end of the rock where there are old olive trees. Stop at the first olive tree, turn right and make for two pine trees below the southern end of the rock. The path up the rock passes between these two trees.

To return to Ag. Pavlos continue on through the olives (look for the way marker) on a path leading to the northwest. On entering the wood the path soon traverses to the left, around a small hill, and a fine panoramic view is seen of the coast and Kelyfos Island . The route continues to descend to the northwest through the pine trees, passing a large rock face on your right. Eventually a wire fence is reached which bounds an olive grove. Continue along the fence to the join the track serving the olive grove. This track leads directly back to Ag. Pavlos.

The return route from here is identical to the route of ascent.