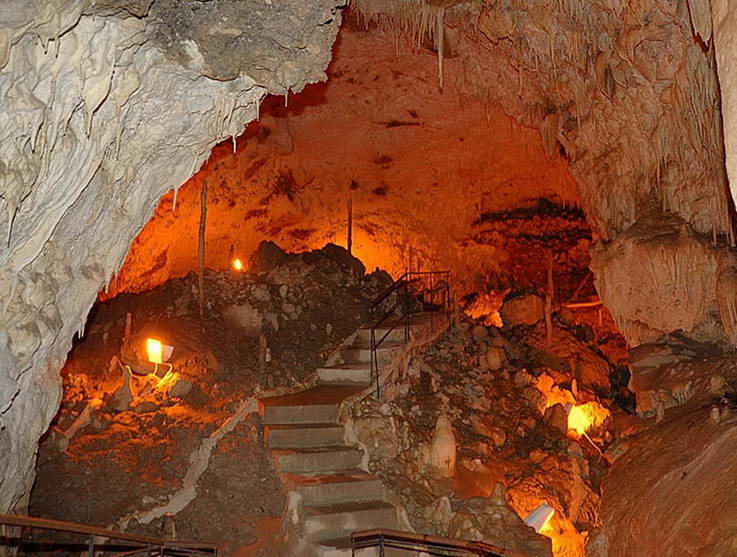 The history of the cave begins at some point in 1960 when two youths, Apostolis Lambris and Georgios K. Karakostas, were ordered by the president of the Community to open up a fissure which appeared to expel cool air, to allow exploration of its interior on the occasion of the arrival of renowned speleologist Anna Petrochilou. After about ten metres of arduous crawling they discovered a wide cavity.


The cave has three levels, of which the highest and oldest has collapsed, leaving a few remain sections. The middle level, which has a length of 250 metres, has been exploited for tourism, while the third section is the underground river bed. The river is visible at the end of the tourist footpath and its waters reappear at a spring in a ravine 25 metres below the cave entrance.


The passage leads to the Chamber of the Red Lake whose running water pours into a succession of stone basins, which together with the delicate formations of stalactites create a spectacular sight. The passage continues downhill before being divided in two by a huge rock mass, to the left of which is yet another marvellous pool. The exploited length of the cave amounts to 250 metres. Three more pools in shades of grey, pink and white have been formed around beautiful coloured stalagmites, while the cave is inhabited by various insects such as Lepidoptera.

A shop of the same name operates next to the cave, with village pies and other traditional products.

Popular
Churches and Monasteries in 5.6km.