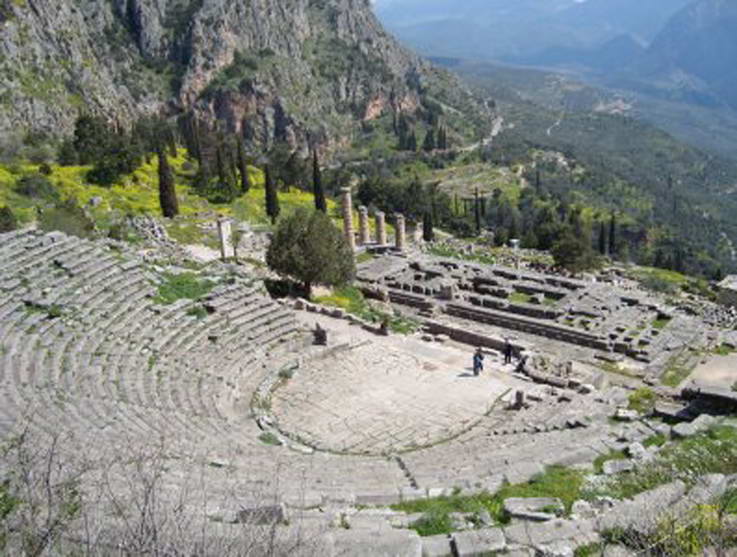 The theatre of Delphi, one of the few theatres in Greece for which we know the exact date and design, is located inside the temenos of Apollo and against the north-east corner of its peribolos, or enclosure wall. This is where the musical contests (song and instrumental music) of the Pythian games and other religious festivals took place, which made this theatre the intellectual and artistic equivalent to the athletic stadium at Olympia.


The theatre's original form is unknown; it is possible that the spectators sat on wooden seats or on the ground. The first stone-built theatre was built in the fourth century BC and was subsequently refurbished several times. The theatre's present form, with its stone-paved orchestra, stone seats and decorated stage, is the result of a 160/159 BC restoration sponsored by Eumenes II of Pergamon. The cavea, built partly on bedrock (to the north and west) and partly on fill (to the south and east), is divided into two uneven sections by a paved diazoma, or landing (twenty seven tiers of seats in the lower section and seven in the upper). It is also divided vertically by a series of staircases into six and seven cunei for the upper and lower sections respectively. The theatre could seat five thousand spectators. The horse-shoe-shaped orchestra is surrounded by an enclosed conduit; its pavement and parapet are Roman. Inscriptions relevant to the emancipation of slaves are embedded in the walls of the parodoi, but their texts have become illegible through wear. The stage, of which only the foundations remain, was probably divided into the proscenium and the stage proper; its front was adorned with a relief frieze depicting the Labours of Hercules.


Although excavated and restored, the theatre is in a poor condition: the cavea has subsided, the limestone blocks are cracking and flaking, and many of its architectural members (seats and blocks of the parodoi walls) remain scattered throughout the temenos.