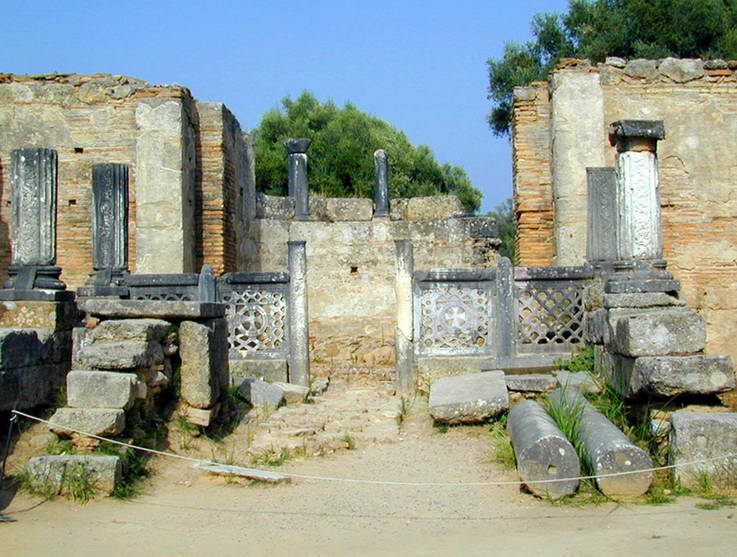 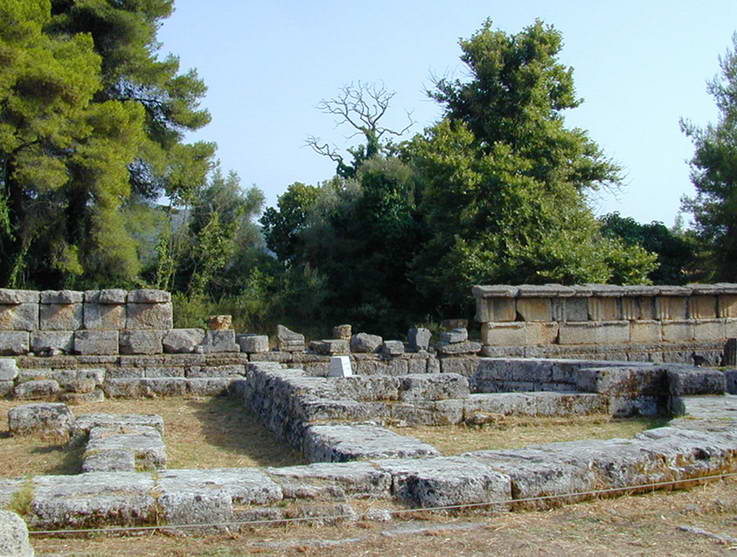 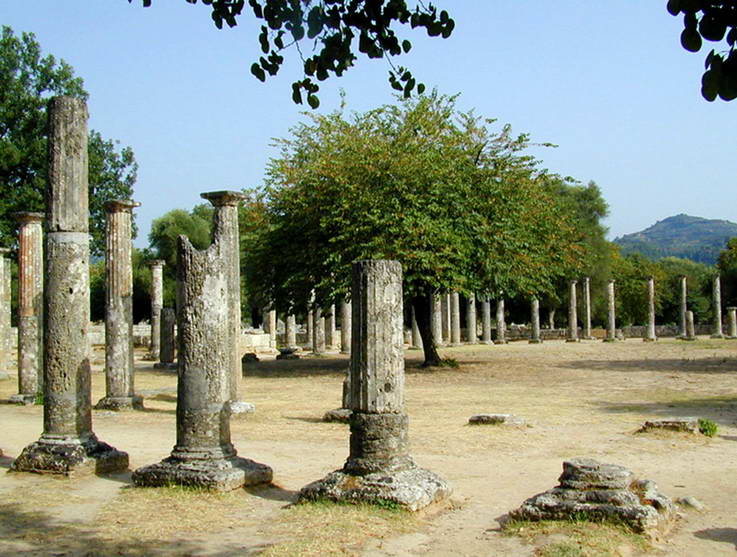 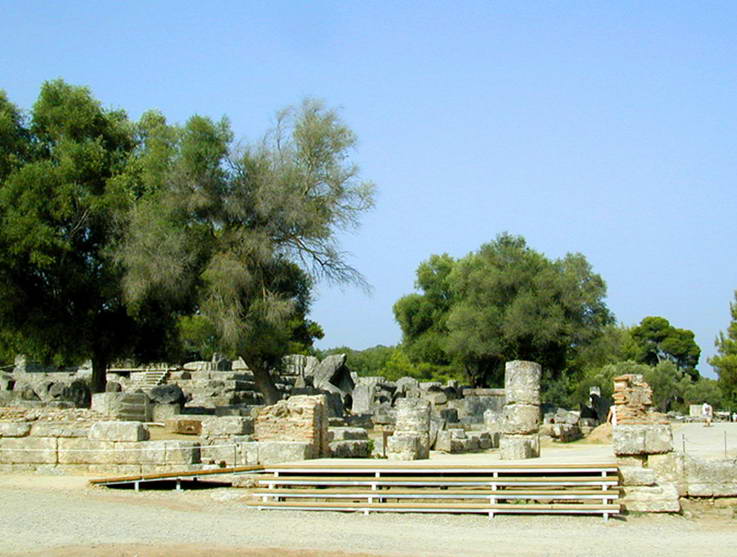 In western Peloponnese, in the beautiful valley of the Alpheios river, lies the most celebrated sanctuary of ancient Greece. Dedicated to Zeus, the father of the gods, it sprawls over the southwest foot of Mount Kronios, at the confluence of the Alpheios and the Kladeos rivers, in a lush, green landscape. Although secluded near the west coast of the Peloponnese, Olympia became the most important religious and athletic centre in Greece. Its fame rests upon the Olympic Games, the greatest national festival and a highly prestigious one world-wide, which was held every four years to honour Zeus. The origin of the cult and of the festival went back many centuries. Local myths concerning the famous Pelops, the first ruler of the region, and the river Alpheios, betray the close ties between the sanctuary and both the East and West.


The archaeological site of Olympia includes the sanctuary of Zeus and the many buildings erected around it, such as athletic premises used for the preparation and celebration of the Olympic Games, administrative buildings and other lay buildings and monuments. The Altis, the sacred enclosure and core of the sanctuary, with its temples, cult buildings and treasuries, occupies the centre of the site. It is surrounded by a peribolos, or enclosure wall, which in the late fourth century BC had three gates ...

The bouleuterion, or Council House, one of the most ancient and important buildings of the sanctuary of Olympia, was the seat both of the Elean Senate, whose members were responsible for the organisation of the games, and possibly of the hellanodikai, or umpires. This is where the athletes registered and drew lots, and where their names and the program of events were announced. It was also where any offences and pleas were tried, and where penalties were decided. Situated south of the temple of Zeus, outside the sacred precinct of the Altis, the building was begun in the sixth century BC and completed in the fourth century BC; small additions and changes were made in the Roman period.

The stadium of Olympia, situated east of the sacred Altis enclosure, was where the ancient Olympic Games and the Heraia, the women's games in honour of Hera, were held. Before the sixth century BC the running events were held on a flat area along the treasuries' terrace, east of the great altar of Zeus. A first stadium (Stadium I) was formed in the Archaic period (mid sixth century BC) by leveling the area south of the Kronios hill inside the Altis. The west short side of the stadium faced the altar of Zeus, to whom the Games were dedicated. In the late sixth century BC a new stadium (Stadium II) was created east of its predecessor, with a racetrack extending beyond the treasuries' terrace; an artificial bank, three metres high, was formed along the south side, while the hill side formed a natural seating area along the north. The stadium received its final form (Stadium III) in the fifth century when the great temple of Zeus was built. By then the Games had become very popular, attracting a great number of both visitors and athletes, so a new stadium was deemed necessary. The new stadium was moved eighty-two metres to the east and seven metres to the north, and was surrounded by artificial banks for the spectators. After the construction of the Echo-hall in the mid-fourth century BC the stadium was isolated from the Altis, which shows that the Games had lost their purely religious character and had become more of an athletic and social event.

The ancient gymnasium of Olympia lies north-west of the Altis enclosure on a flat stretch of land by the Kladeos river bank. It is adjacent to the palaestra, which extends the gymnasium complex towards the south. Here athletes practiced track and field and the pentathlon. Before the construction of the gymnasium in the Hellenistic period, these events took place outdoors. The surviving structure dates to the second century BC.

The palaestra is situated west of the Altis enclosure, near the Kladeos river. Built in the third century BC as part of the gymnasium complex, it was used to practice boxing, wrestling and jumping.

The Leonidaion, situated at the south-west corner of the sanctuary, outside the sacred precinct of the Altis, was a large and luxurious hostel for distinguished visitors to the Olympic Games. It was built in approximately 330 BC and was remodeled twice in Roman times. A dedicatory inscription partially preserved on the epistyle of the outer Ionic stoa records that the building was erected by Leonidas son of Leotas from Naxos, who was both architect and benefactor. His statue stood at the north east corner of the building where its inscribed pedestal was found.

West of the sacred enclosure, directly opposite the temple of Zeus, was the workshop of Pheidias where the great sculptor crafted the gigantic chryselephantine statue of Zeus, listed as one of the Seven Wonders of the ancient world. The building was erected in the second half of the fifth century, when Pheidias, after completing the sculptures for the Athenian Acropolis, went to Olympia to work on the statue of Zeus. Excavation finds and pottery date it precisely to 430-420 BC. Later the workshop became a place of worship containing an altar for sacrifices to various gods, which Pausanias (V, 15, 1) saw in the second century AD. In the fifth century AD, a Christian basilica was erected over its ruins.

West of the sacred enclosure and north of the workshop of Pheidias lies the Theokoleon. This was the seat of the theokoloi, the priests of Olympia, but also the residence of the sanctuary staff, which included soothsayers, interpreters, bearers of sacrificial animals, musicians and a woodmonger who provided the wood used in sacrifices.

Immediately outside the Krypte, the entrance to the stadium and along the treasury terrace is a row of sixteen pedestals, which supported the Zanes. These were bronze statues of Zeus, none of which has survived, created from the fines imposed on athletes for cheating at the Olympic Games. Their prominent position was intended to dissuade other athletes from cheating.

South of the Heraion was the Pelopion, a funerary monument (cenotaph) dedicated to Pelops, a much venerated Elean hero. According to Pausanias (V, 13, 1) this monument was dedicated by Hercules, a descendant of Pelops. Beneath the Pelopion lies a prehistoric tumulus (Early Helladic, approximately 2500 BC) and its enclosure. The earliest structure inside the Altis, its top was still visible in the Classical period.

The so-called Leonidaion baths, situated outside the south-west corner of the Altis, owe their name to the nearby guesthouse (though the two buildings were not related). This well-preserved monument is unique in Olympia in that it preserves its original height and roof. Built in the third century AD, it remained in use until the sixth century and was remodeled several times.

The hippodrome was situated at the south-east corner of the sanctuary of Olympia, on the large flat area south of the stadium and ran almost parallel to the latter. Its exact location is unknown, since it was washed away completely by the Alpheios river in the Middle Ages when the river's west bank dike fell into disrepair. The hippodrome housed the equestrian contests (horse racing and chariot-racing) of the Olympic Games and was therefore one of the most important monuments of the site.